Skip to content
Few days back there was a controversy surrounding Bollywood actor Akshay Kumar over his tweet glorifying manual scavengers as ‘cleaning soldiers’. So all the responsible citizens stood against this thoughtless and insensitive tweet. Kudos to the changing society but as I was going through the details of this news piece, I received a WhatsApp message from a male friend of mine on the occasion of International Day of The Girl Child- “Seven Complicated Facts about Women”. 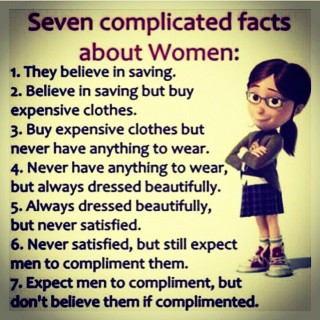 Source: Google Search
He might have thought while the world is busy sharing serious articles over the issue, he can bring some smiles by sending across what seems a harmless comic forward. I guess it was a bad day for him because I was not amused. I sent him back this: 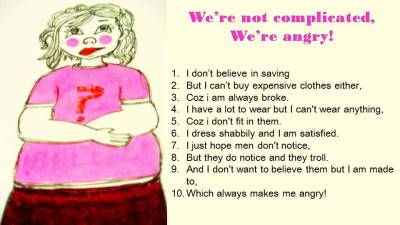 Source: Made by me
He was amused and complimented me on my witty reply. However, I was annoyed- annoyed at the confusion of the expectations of the people. Society glorifies hard working mothers, who work 24*7 relentlessly, even more on holidays. At the same time we admit that Indian women are one of the most stressed people in the world due to this. But I wonder why no one frowns on this deifying of women into superhuman or I should rather say a robot? And even after admitting this sad state of Indian women, every husband reminds his wife of the sacrifices his mother has done and expects her to do so as well. The KRA of being a woman ranges from being slim, fair, well dressed, pleasant, excellent at cooking and other household chores, ace at handling finances, a devout mother, traditional, soft spoken yet loud and confident during presentations, should stay longer in offices but also organise family functions etc. And when they try really hard to be perfectionists, they are trolled. We know how high rates of domestic violence we have in the country but every second joke is about a husband being scolded or beaten by wife.

Source: HBR
Why this confusion? Why this judgement? Why can’t we just be?
And that’s what makes us angry.

2 thoughts on “We are not complicated, we are angry!”

"The good that you cannot see is the infinity and the infinity is divine so trust the happenstances and embrace all the odds and evens you're encountered with." - Aparajita Tripathi

Keep your intentions clear and straight. End of Story.

Diary of a Quarantined Gal

Selflessly yours....I decorate my darkness, to light up smiles for others.

From Katutura to Norway